Everyone loves a little sweetness in their life, but Jennifer Mowad has made sweetness her life’s work. Affectionately known as “Cocoa” around town, Mowad is the owner and operator of local confectionary Cocoa & Spice and is one of Cville Pride’s constant supporters. We sat down with her in her new store to talk a little bit about chocolate, Pride, and Cville. 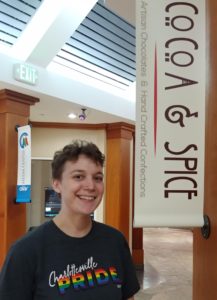 Mowad opened Cocoa & Spice at the start of 2015 after moving to Charlottesville from New Jersey almost a decade prior. She remembers, “I had always wanted to open my own business. I wasn’t quite sure what it was at the time, but I used to make chocolate products for my friends and family during the holidays. I started the business out of my home kitchen and would sell as a vendor on the downtown mall. I would roll a little cart downtown, set up a table and sell some chocolate.” That year, she began vending at City Market, Sprint Pavilion, and the 4th Annual Cville Pride Festival, where she sold rainbow fudge and signature drinking chocolate.

Cocoa & Spice is now moving from a store front Stewart Street to the Downtown Mall. Mowad is transforming the space behind Grit Coffee with the help of her girlfriend. “She’s better at this kind of thing,” Mowad laughs. “She helped pick out the colors, wallpaper, all that.” And it matters that while they’re growing into this space, her business is known to be LGBTQ friendly. “I lived in Philadelphia for 6 years during undergrad and grad school and there they have the ‘Gayborhood’. There’s rainbow flags everywhere and I guess it was during my coming out, and that was always a kind of safe haven for me… Anytime I saw a rainbow flag hanging, I got excited and I felt safe, like, ‘Okay, that’s a business that’s accepting and I want to go there.’ Going into my own business, I wanted to do that same thing.”

So she’s talking the talk, and walking the walk. Mowad tells us, “[Being at Pride] is my way of giving back, or more like paying it forward, for what I experienced when I was younger and still trying to figure out who I was… so for me this is a way for me to represent and say, ‘This is who I am as a business and I want you to know that I support everyone in the community.’ I consider myself and the business to be very warm and welcoming to all of Charlottesville. Pride, to me, it’s love and acceptance and getting to be who you are and just being comfortable.” 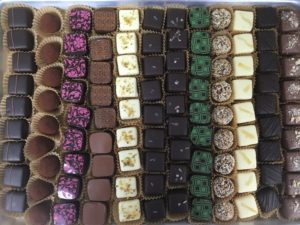 As we chat about our home city, Mowad mentions that it’s not just the local LGBTQ community she loves, it’s the town at large. “The Charlottesville community is three things- supportive, caring, and involved. Through this whole process, people are constantly checking in. They’ll walk by and knock on the window and give me a thumbs up, whether I know them or not. They’re just very involved in this whole process, whether it’s liking a post online or telling me about some chocolate I should check out or just giving feedback about what I’ve done here.”

So what’s next for Cocoa & Spice? “This is it!” She looks pointedly around the mostly empty storefront, with its paint and drip sheets. “This is a huge step for me to move here… The Pride festival has been a marker, like ‘soft-opening by Pride”. In this space, I want to do more with events, other local vendors and non-profits.” She mentions bringing in a pinball machine that belongs to the Charlottesville Derby Dames (of which she is the bench manager) and will have some classes and demonstrations in chocolate making.

The last things Mowad wanted anyone reading this to know- “Not many people know, but Lisa [Green, Pride Festival Director] actually gave me the nickname Cocoa. I mean, the business name is Cocoa & Spice, but during that first festival she was like ‘I’m gonna call you Cocoa’… I love having that little connection with her and with Pride”.