Reason is your friendly neighborhood brewery, run by locals for locals, and is the first and only craft brewery/tasting room Safe Space in Charlottesville.

When you first think of Pride your first thought probably isn’t beer, but considering we have 10 breweries in Charlottesville and over 30 in the surrounding area, the owner Jeff Raileanu states “it just makes sense” to be a safe space so people don’t have to worry when they go out for a beer. This brewery wants to build a bridge between community and business for everyone.

Last year in October Reason became a certified Safe Space because it goes along with their “company culture and who (they) are as human beings,” states the sales representative, Devon Callon. When asked why they chose to train the bartender, Kylie Bailey responded “it was important to me because I didn’t know how to use pronouns or even what they were”. She continued,“I believe every business should be safe zone trained”. As Jeff put it “you don’t know what you don’t know, and this training really helps in that aspect” of making you more aware. Devon added “Beer really doesn’t have a gender… and it’s important to treat people like humans and using the pronouns that they want to go by”. 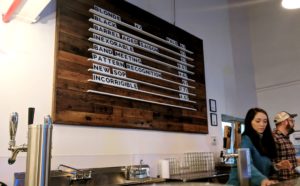 As a bartender, Kylie noticed that after becoming Safe Space trained it didn’t make more people from the LGBTQ community visit, but rather “made people from the community feel more comfortable and free to talk to me,” knowing it is a safe space. “We already had people coming in from the (LBGTQ) community, so the goal was not to profit off this (but rather) to make our existing customers feel more comfortable.” Kylie said, “We want to be the Mr.Rodgers of breweries,”- where everyone can feel welcome.

Walking into Reason, the warm lighting and overwhelming homey feeling is only matched by the character of the employees themselves. Pictures by local artist dance along the clean white walls and across from the entrance you see Kylie, a friendly Charlottesville native who is also your bartender, ready to get you your favorite brew. All while feeling comfortable, knowing that this is a safe space for all people. From owner to bartender, there is always a good Reason to take care and accept one another.